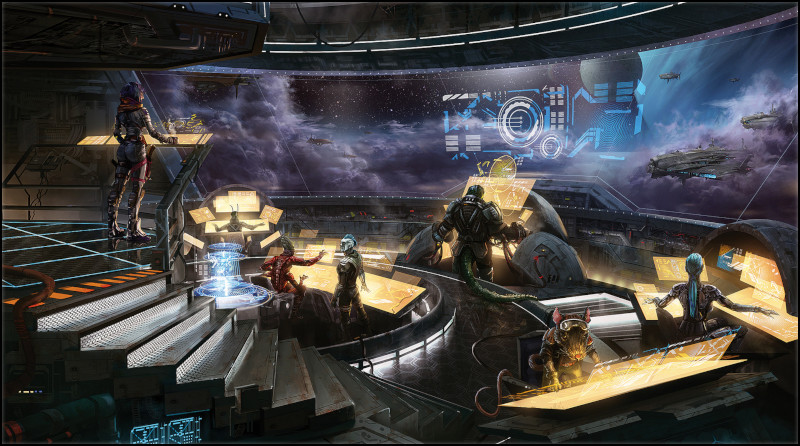 In this wiki, we will be modifying the existing rules to conform to our particular group’s preferences. Since we have all played 2nd-edition Pathfinder, as well as 5th-edition D&D, there are many rules and ideas from these other systems that would be a nice welcome to Starfinder.

This section will be updated regularly, so check back often for new information.

Dying Condition: I want to take a portion of 2nd-edition Pathfinder here. If a character is reduced to Dying, then his initiative immediately changes to 1 greater than that of the creature or person that attacked them.

Critical Hits and Fumbles: We will be adding in the critical hit/critical success rule from 2nd-edition Pathfinder, where if you succeed in an attack roll, skill check, or saving throw by 10 or more, you score a critical. In combat, critical hits will not only do their normal increased damage, but will also gain a special effect (noted by the weapon or spell). We will be using Starfinder’s critical hit deck to augment these special effects. When a player scores a critical hit in combat, he draws one card from the deck and finds his damage type on the card. He then has a choice between his weapon’s normal effect or the new one listed on the card. I have the critical hit cards all scanned and uploaded into Roll20, and I will be doing the same for the fumble deck soon. Critical Fumbles will only occur if the player rolls a natural 1 AND the check failed by 10 or more.

System Security Level: Star systems will be categorized by security levels. Security levels have a decimal rating, from 0.0 (the lowest – no security forces whatsoever) to 1.0 (the highest security status possible, such as the space around Absalom Station). Security levels will indicate the presence of military and police forces, and will also dictate as to whether or not ships entering the system will be scanned and have their IDs investigated. The term High-Sec is used to denote systems with a Security Level of 0.5 to 1.0, while the term Low-Sec is used to denote systems with a security rating of 0.0 to 0.5. There are some systems that have a negative security level. These systems are called Null-Sec regions, and are usually reserved to active war zones and hostile territories.

The star map being used for our campaign also shows lines in between major star systems. These lines represent major trade routes. Travel along these routes will have higher than normal security.

System Technology Level: Each star system (and each habitable planet or object within it) has a Technology Level. These levels range from 1 to 10, just like a computer rating, and represent the level of sophistication that the creatures living there have. When using communication devices or computers, you are limited to a maximum rating of that of the planet or system. For example, if you were using a level 10 computer to access the data network of a Tech Level 4 society’s computers, their slow and out-dated software, combined with dial-up speeds, would limit your checks as if you were using a tier 4 computer. The GM may rule that certain benefits or hindrances may apply to each specific situation, but that will be done on a case-by-case basis.

Acceleration Gates: While drift drives have reduced travel between systems dramatically, travel times can still sometimes stretch into weeks. Acceleration gates can help slower ships speed up their travel times. It is not commonly known how acceleration gates came to be. Some believe they are technological leftovers from the First Ones, while others say that the tech priests of Triune created them. Acceleration gates can be found primarily in the highest security systems, and among strategic locations throughout the galaxy. Each acceleration gate will allow ships passing through it to travel to its linked system as if the ship’s Drift rating were twice its normal. Many systems have multiple Acceleration gates within them. Each gate is linked to one other system. Not every ship is allowed to use an Acceleration gate. As these gates are vital for the rapid transit of goods and services, the highest security is placed around them. Ships, cargo, and crew will all be scanned before a gate can be used, and every gate use will be logged in an official record. For those groups wishing to avoid law enforcement, travel through gates is not ideal. Acceleration gates should not be confused with Drift beacons, they are very different.

Drift Gates and Navigation: Drift gates in this game universe should actually be called Drift Buoys, as they are large satellites that float within a star system and send out navigational beacons that travel at Drift speeds. Drift gates (as well as Acceleration gates) also channel communications through them at Drift speeds. Communication distances and speeds are calculated in the following manner:

Each ship, station, or facility can communicate at near-instantaneous speed with anyone else that is within a number of hexes equal to or less than their computer’s rating away. Communication speeds slow down from there (see table below). Beyond the communications initial range, further ranges are broken down into increments. Each increment has a range equal to the computer’s rating squared, and has an increasing penalty. For example, a communications center on Absolom Station, with a computer rating of 10, would have an instantaneous communication level with anyone within 10 hexes. For every 100 hexes after that, there would be an increase in communiction time.

Acceleration gates dramatically increase the speed of communications to star systems that have them. Acceleration gates allow the communications to count connected systems rather than the number of hexes, and if that connection is on a trade route, then the next connection on that route is treated as being only 1 hex away. Obviously, this can get a bit over-complicated, so the GM will usually just assign an arbitrary delay (or not) as is fitting for the situation.

Drift gates also allow for safe navigation through the galaxy, provided that you use them. Drift gates are sort of like modern cell phone towers. They receive a signal (from your ship), log it, verify the coordinates of nearby Drift gates and of the ship in question, and then provide updated navigational data to the ship’s computer. The telling factor of that statement was that the Drift gates log all traffic that utilizes the Drift gates’ beacon signals. Those with a less-than-legal standing will probably avoid using Drift gates for their navigation, but that makes navigating long distances more dangerous and time-consuming. The GM will have further details, should the party ever need it.

Jump-Off Point: The area in the core systems that are inhabited and charted is often referred to as Near Space. The area outside of Near Space is often called The Vast. When a ship has traveled through the last Acceleration gate on the way into the Vast, they are said to have crossed the Jump-Off Point. Many systems along the borders between Near Space and The Vast will either have an increased security border patrol or they will have extra sensors set up. Quite often these systems will have extra emergency personnel in ships with faster Drift drives to respond to distress calls from within The Vast.

Unique PC Abilities: Each character will gain a little background information to help point them in the right direction of the campaign goals and will also gain a unique ability. These unique abilities will be of a non-combat type, mostly consisting of information gathering. These abilities are based upon your starting class, and you will gain further abilities as you level up in that class. Multi-classing is allowed in the game, but it will slow your progress for gaining additional unique abilities. As players progress, they will gain more abilities, and some of them will be combat-oriented (at least for those classes that are more combatative in nature). New players to the campaign and players who either change characters or have had their characters die will also be given a unique back-story and ability, but it may not be introduced right away. The sooner you can give me details of your character, to sooner I can come up with something. If you just show up to a session with a new character, or only give me a day or two notice, then you may have to wait another full session before you gain any abilities.

Luck Checks: Sometimes bad things happen to good people. Sometimes there is a single person that bad things keep happening to. In our campaign, we will use a Luck mechanic to represent who bad and/or good things happen to. When making a Luck check, a player rolls 1d20 and adds the number of Resolve Points they have remaining. A higher number on the result represents a more fortunate outcome, while those rolling a lower number will more often than not have bad things happen to them.

Luck checks will be made when a PC needs to be chosen randomly, either for good or bad purposes. For example, the PCs are crossing a rickety bridge on a jungle world and the bridge is in danger of collapse. PCs proceed across, and the GM calls for a Luck check for each player in the same order that they are crossing. The first PC to roll a Luck check with a result under 10 falls through a rotten board.