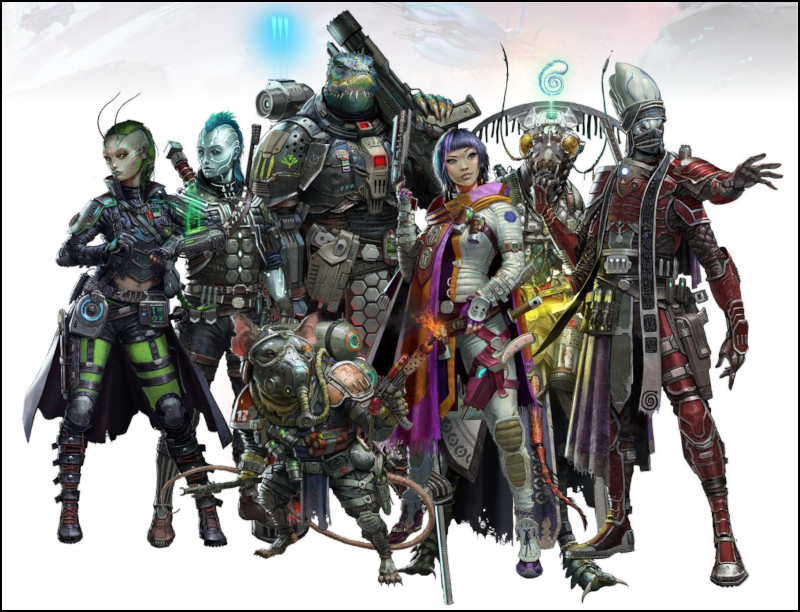 Androids come in all shapes and sizes. Most of them are human-looking, but they have been known to look like other species. Not every android has the glowing skin and eyes of the typical android, some of them cannot be told apart from other humanoids, while other have very obvious mechanical parts. It’s up to the player, with the GM’s permission, if they want to have an android character that looks differently.

Androids don’t always get the best reception from the other races. The Vesk especially dislike androids. The idea of an artificial being constructed to perform duties just seems to rub them the wrong way. Some Humans also dislike androids, calling them “skinjobs” and other such derogatory terms. Their dislike stems more from a primitive fear than a rational dislike. Of all the races, Ysoki embrace androids and welcome them.

Humans are the most populous race in the galaxy, and the most recent to the intergalactic stage. Many of the races out there resent Humans being included in galactic affairs (primarily the Vesk, who don’t think that Humans yet have the wisdom as a species to hold a rank as equals). But, with Absalom Station becoming the center of galactic politics, these other races have reluctantly agreed to accept Humans.

Kasathas are one of the galaxy’s oldest races, but their numbers are dwindling. They tend to mate for life, and if their mate dies, they do not choose another.

Long ago, the Kasathas, while still on their homeworld, were at war with the Vesk. The Vesk were very animalistic and aggressive. Coupled with an unbelievably high reproductive rate, it was clear that the Vesk would overrun the galaxy. Kasathan scientists came up with a drastic solution. They developed a virus that would infect only Vesk, and would make them sterile. There were heated debates over whether or not to use the virus, but it was finally given the “go ahead.”

The virus spread more quickly than anyone had thought, and with more horrible results. Rather than infecting the majority of the population with sterility, it instead seemed to mutate and killed 99% of the female Vesk population within a matter of a few years. The females that were immune were quickly whisked away to become breeders. They live the lives of queens, but are forced to mate and produce children as often as they can. Being Vesk, these females accepted their duties with pride, and the Vesk race carried on, but much more slowly.

The resulting loss of their reproduction cycles combined with their very aggressive and warlike natures, led the Vesk to lose more than half of their population in the first century. Fearing a total extinction of the Vesk race might occur, the Kasathan scientists scrambled to enact a cure (as did all of the other races). The virus, however, had mutated beyond their understanding and continues to the present day to be incurable.

The Kasathas, it should be noted, do not hate the Vesk, they just saw the Vesk as a threat to the galaxy that had to be curbed.

Lashuntas get along well with all the other races. They recently ended a long-standing war with the Formians (a race of ant-like beings).

Shirrens are generally distrusted by almost every other race. With the current threat of The Swarm looming over everyone’s minds, the sight of a Shirren only brings that fear to the surface. Most people, if they have lived around Shirrens for some time, eventually warm up to their ever-curious and optimistic personalities.

The Vesk come in many shapes and sizes. Their most common appearance is that portrayed in the Starfinder rulebooks, but they also have many lesser offshoots. They can look like Rodians or Trandoshans (from Star Wars), like the Gorn (from Star Trek), or even the Turians (from the Mass Effect games). Despite having lizard-like (and sometimes avian) features and characteristics, Vesk give birth to live young.

The Vesk Empire has always been vast and war-like. If it weren’t for the Kasathan “plague”, they would have taken their rightful place as conquerers of the galaxy. This is a fact that every Vesk holds true, and they hate Kasathas for it.

Vesk society is purely militaristic. They also have a stong cultural sense of public service. It is rare to find a Vesk that puts individual concerns above the needs of the community. Every Vesk, from young to old, serves the state in some capacity. Because of their natural inclination towards public service and self-sacrifice, the Vesk tend to be poor entrepreneurs.

The Vesk have 27 citizenship tiers, beginning with civilians (which includes client races and children). The initial period of military service is the second tier. Formal citizenship is conferred at the third tier, after their initial “boot” training. The tiers go up from there according to importance. At the top are the Primarchs, who each rule a colonization cluster. The Primarchs vote on matters of great importance. They otherwise maintain a “hands-off” policy, trusting the citizens on each level below them to do their jobs competently.

Throughout their lives, Vesk ascend to the higher tiers and are occaisionally demoted to lower ones. The stigma associated with demotion lies not on the individual, but on those who promoted them when they weren’t ready for additional responsibility. This curbs the tendency to promote individuals into positions beyond their capabilities and stifles favoritism. Settling into a role and rank is not considered stagnation. Vesk value knowing one’s own limitations more than being ambitious.

Vesk enjoy broad freedoms, so long as one completes their duties and does not prevent others from doing theirs. Nothing is forbidden in Vesk culture, providing it doesn’t interfere with duties. For example, there are no laws against drug use, but if someone is unable to perform their duties due to drug use, then their superiors step in. Judicial proceedings are more like interventions. Peers express their concern and try to convince the offender to change. If this rehabilitation fails, Vesk have no qualms about sentencing dangerous individuals and repeat offenders to life at hard labor for the State.

The Vesk Imperial Anthem is called “Die for the Cause.”

Aside from the Shirrens, no other race is mistrusted more than the Ysoki. In metagame terms, the other races view the Ysoki like the Dragonlance world views Kender. If something is missing, stolen, or broken, chances are that an Ysoki was behind it. Ysoki generally get blamed for a lot of things, and not altogether undeservedly.

Ysoki are a communal race. They have large extended families and have loose individual property laws and concerns. They have no problem sharing their belongings, and likewise don’t see the problem of “borrowing” things that belong to others, even if all they do is disassemble it to see what’s inside.

There are also many sub-races that are similar in most ways to Ysoki. It is unclear whether or not these races evolved naturally or are the product of genetic manipulation. These races include other small rodent-like animal types, such as raccoon or rabbit. In all ways other than form, they have the same stats and options as the base Ysoki.